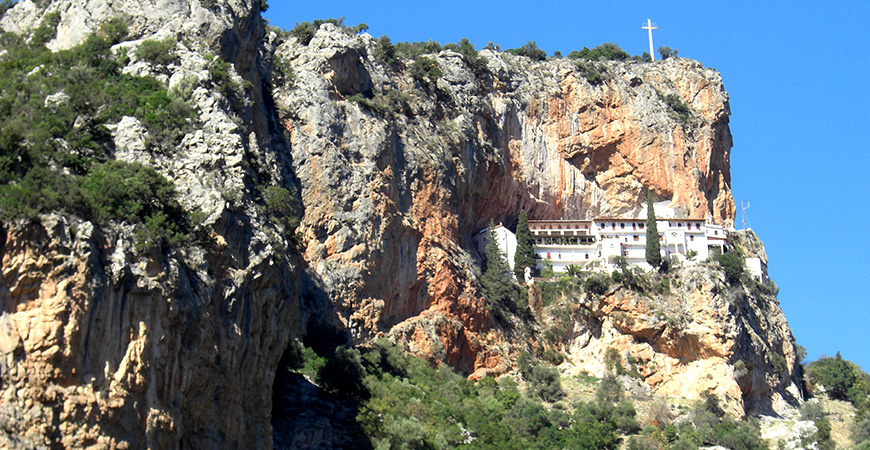 The Myrtoon’s visitors may combine their excursion with the following options:

The Elona Monastery is built up on the steep red rock within the canyon of Dafnonas. It is one of the most beautiful monasteries of Arkadia and gathers hundreds of faithful who climb its vertical steps to worship the icon of Holy Mary, made by Apostle Luke, believed to work miracles.

The Elona monastery is 17km far from Myrtoon (15km from Leonidio and 14km from Kosmas). You may visit it by car via the route Leonidio – Elona.

The year this monastery was founded is unknown. Tradition says it was founded by two eremites, Dositheos and Kallinikos, in about 1500. During Turkish rule, the monastery was looted and torched many times. Since 1875 it prospered with the aid of the residents of Kynouria and Spetses, while it played an encouraging role for the fighters during the Greek Revolution of 1821.

The monastery used to be devoted to Zoodohos Pigi and since 1979 it has been devoted to the Assumption of Mary. It’s a women’s monastery.

In a rutty and rocky area, on the west of Leonidio’s valley, in the socket created by the steep mountains, you will see the Monastery of Sintza, devoted to Agios Nikolaos, almost as if it’s hanging from the sky.
All buildings are roofed with ceramic tiles and built inside the rock’s bowl. The year it was founded is not known, but it is mentioned in an official document dating back in 1622 signed by the Patriarch of Jerusalem, Theofanis. The year inscribed over the gate is 1783, when it was probably renovated. According to researchers, the Monastery was built somewhere in 1200 - 1300.
You may approach the monastery via a smooth dirt road which is an hour and a half away from Poulithra by feet. Access by car is much easier.