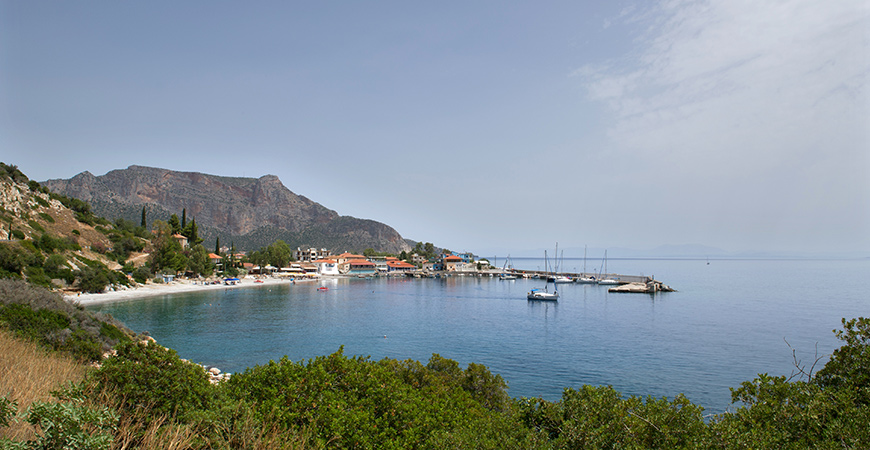 Leonidio, the heart and soul of Tsakonia, capital of Kynouria province with 4.000 residents, welcomes you as soon as you reach lake Pelia. It is built on the rich valley of the Dafnonas river, where impressive red rocks, grand and proud, rise above.

It is a traditional town with historical listed monuments, manors and towers dating before 1800s and neoclassical buildings of the mid nineteenth century. Two-storey and three-storey manors with paved or pebble yards, cisterns with stone spouts, stone steps even in the interior of the houses, beautiful loggias covered with ceramic tiles, high whitewashed stone walls and sculptured and painted ceilings, prepare the visitor for the experience of the Tsakonian architecture; a splendid architecture witnessing the pre-revolution economic prosperity of Prastos first and then Leonidio.

Three of the most glorious pre-revolution monuments of the Peloponnese and jewels of our architectural heritage are found in Leonidio: The Tsikaliotis Tower (a tower house built in 1808) and the Polytimos manor (built in 1816) are listed monuments that have street doors with embrasures and the Katsikogiannis manor (tower house built in 1807) which is located at the northern side of the town. Hatziroudis tower is also interesting and one of the oldest and traditional neighborhoods, Agia Kyriaki, is suitable for promenades.

The visitor will also be interested in the Easter customs and its unique celebrations in the area. All parishes of Leonidio compete with each other to make the most beautiful Epitaphios and the celebration climaxes at night after Resurrection; they build and raise colored air balloons that light in a spectacular way the Tsaconian sky. The Municipality of Leonidio holds every summer the Tsaconian eggplant fest and a competition of traditional cooking.

Plaka, Leonidio’s seaport, is 4km far. It is a small, quiet and well-built port with rooms to rent, taverns and bars by the sea. On the left of Plaka, there is the famous Lakkos beach, in front of the small valley of Leonidio, which is farmed with olive trees, fruits and vegetables.

The Tsikaliotis Tower, built in 1808 by the benefactor and member of Filiki Eteria or Society of Friends, Konstantinos Tsikaliotis, worths a visit, and a lot more (ask at the municipality or the hotel if someone can open it for you so you can visit it).

The special fortification architecture, the byzantine influences, the details in the interior (wooden sculptured ceilings, hiding places, sitting rooms, etc.) but also the unique experience of entering (by climbing) in the fort tower will amaze even non-fans of traditional architecture.

Walking in Leonidio, you will see more interesting manors, such as the manor of Ouranis: a listed tower house built in 1808 that combines oriental and occidental elements. Its painted ceilings are remarkable.